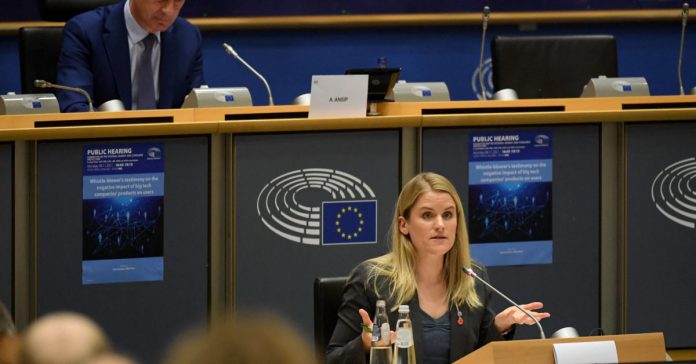 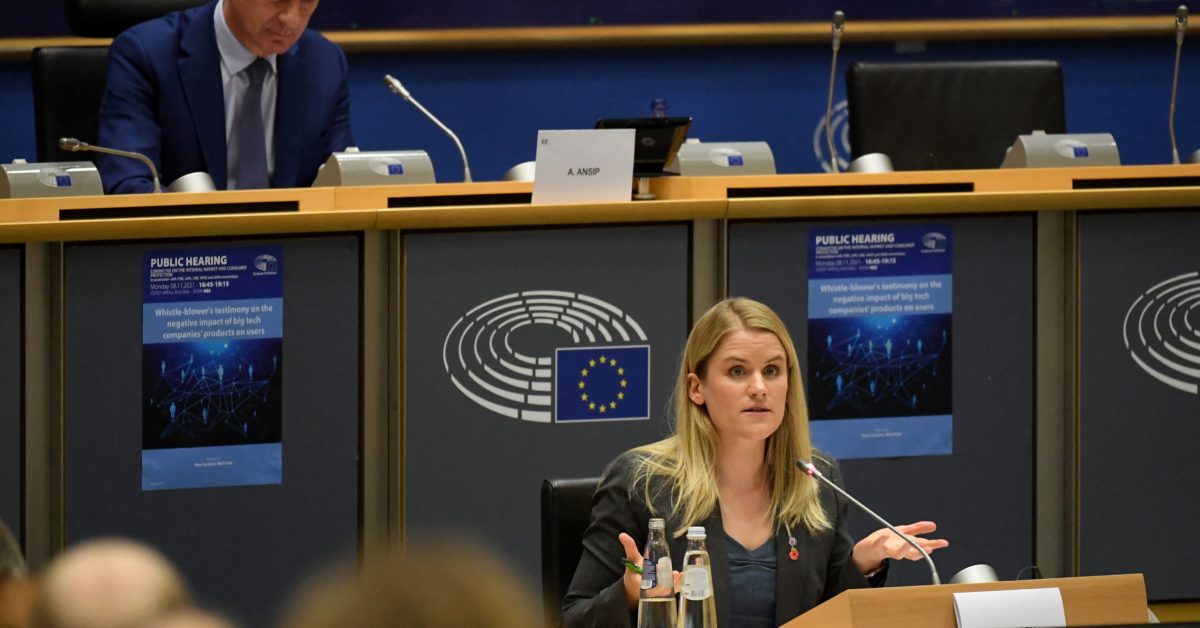 After a morning meeting with Commissioner Thierry Breton and Danish Socialist MEP Christel Schaldemose, the American data engineer headed to the Parliament in Brussels to explain how her insights into the tech behemoth could apply to the EU’s upcoming content moderation rules, the Digital Services Act (DSA).

„The Digital Services Act that is now before this Parliament has the potential to be a global gold standard,“ said Haugen. „It can inspire other countries, including my own, to pursue new rules that would safeguard our democracies.“

The Parliament is working on the fine print of the DSA, a bill that aims to impose new restrictions on how tech companies like Facebook and Google police content on their platforms.

Here are five takeaways from the three-hour hearing:

1. Preaching to the choir

As expected, the welcome lawmakers extended was more than warm.

Before the hearing, many posted selfies and pictures on Twitter thanking Haugen for her testimony. During the hearing they praised her “courage,” loudly applauded her statements and asked for her advice on what they should do to ensure that the DSA has teeth.

„Frances Haugen reconfirms why we are acting at the EU level on the Digital Services Act … Many of her concerns are already addressed, but we need to make sure this works in practice and makes a real change,” said Dita Charanzová, who works on the DSA on behalf of Renew Europe.

In return, Haugen called EU lawmakers “a light in the darkness.” In short, it was a love affair.

Haugen warned the European Parliament against creating loopholes in the Digital Services Act.

“The devil will be in the details. For example, if you write a broad exemption from transparency for anything classified as a ‘trade secret,’ the companies will say everything is a trade secret,” she told lawmakers.

Companies should not be allowed to use trade secrets as “an excuse” to refuse access to data, she added, highlighting the importance of greater access to Facebook’s inner workings for independent researchers, investigative journalists and NGOs.

Haugen also warned that news media shouldn’t be exempted from the Digital Services Act, because the rules need to be neutral to fight harmful content such as disinformation.

“Let me be very clear — every modern disinformation campaign will exploit news media channels on digital platforms by gaming the system,” she said.

While some of her advice and warnings echo pleas made by NGOs — notably on the media exemptions — the direct impact of Haugen’s testimony on the final legislation is unclear.

Despite questioning around online ads and how Facebook’s algorithms works — hot-button issues at the center of a bitter fight within the European Parliament — Haugen’s statements did not land a knock-out punch to sway the debate either way.

She did not back a full-blown ban on targeted advertising, depriving lawmakers who have advocated it of a much-needed ally.

For the Digital Services Act, the real fight is now between the European Parliament, European Commission and member countries, which will gather early next year to hammer out a final compromise on the content proposals. Haugen’s evidence is a footnote in that upcoming battle.

One of Haugen’s key messages is that misgivings about Facebook’s operations should not condemn the entire tech business, and that in fact the U.S. social media giant is committing worse infractions than its rivals. The whistleblower has previously worked at other tech companies including Google, Pinterest and Yelp, and was able to compare the way they operate.

“The choices being made by Facebook’s leadership are a huge problem — for children, for public safety, for democracy — that is why I came forward,” she said. “And let’s be clear: it doesn’t have to be this way.”

During the hearing, Haugen compared Facebook to one of its main competitors, Twitter, arguing that Jack Dorsey’s company was “substantially more transparent,” accountable and aware of what’s on its platform. Some foreign manipulation operations happening on Facebook were even caught by Twitter, she said.

5. MEPs have learned their lesson

The last time MEPs had a top Facebook executive in the house, it was Mark Zuckerberg, and European lawmakers made fools of themselves. The format — MEPs asked their questions in a row before Zuckerberg could answer — was ridiculed after the Facebook CEO easily managed to dodge every bullet.

Unlike Haugen, Zuckerberg was most definitely not hailed as a hero, so the context was different, but the questions asked back then showed a lack of understanding and expertise when it comes to tech.

Three years later, that has changed. Lawmakers are now handling a flurry of tech bills aiming to regulate artificial intelligence, to foster digital competition and limit the market power of tech juggernauts, and to ramp up cybersecurity.