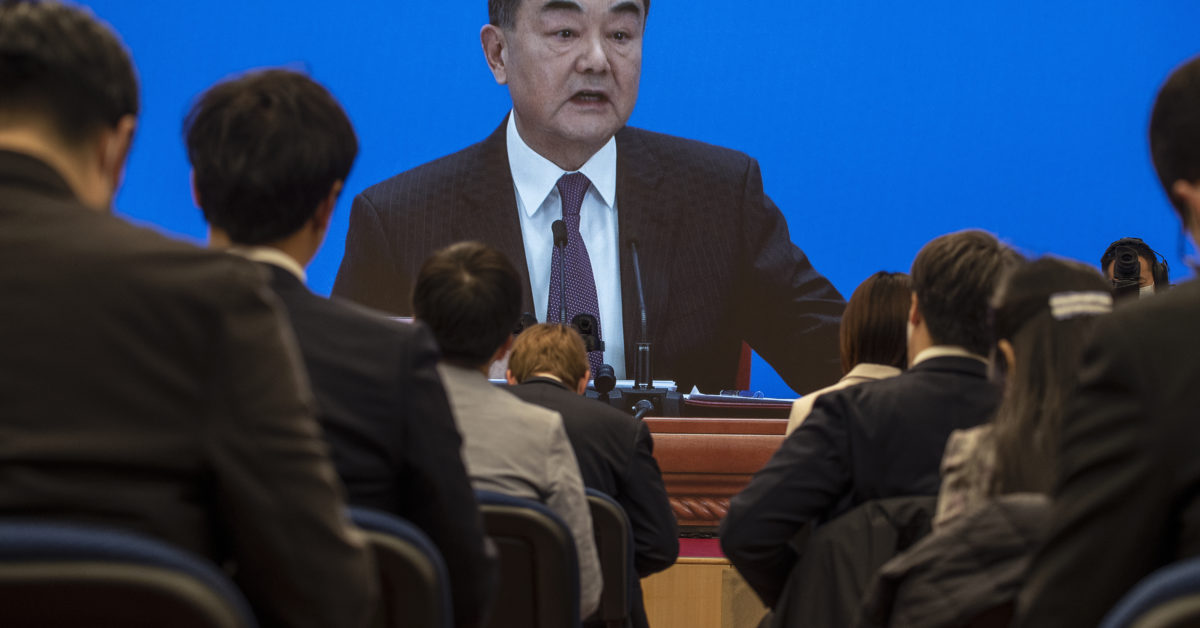 Beijing has stepped up criticism of Europe’s „triple position“ policy on China which simultaneously considers the Asian superpower a partner, competitor and systemic rival.

„The EU’s triple positioning for China is mutually contradictory and cancels itself out,“ Foreign Minister Wang Yi told his Maltese counterpart Evarist Bartolo in the Chinese city of Chengdu on Friday.

„China and Europe are partners, not competitors,“ said Wang, according to a statement issued by the Chinese government. „China and Europe have neither serious conflicts of interest, nor historical imbroglios.“

Wang has long dismissed the notion that China is a rival for Europe but his latest comments represent a more-forceful criticism of the EU’s three-pronged approach.

The EU adopted that stance in 2019 aiming for a balanced approach that includes human rights sanctions and tougher foreign subsidy screening, while increasing cooperation in areas such as climate change and boosting economic ties, most notably by clinching an investment pact half a year ago.

Lately however, the EU has turned tougher. In a progress report on relations in April, European Commission President Ursula von der Leyen slammed Beijing’s „authoritarian shift“ and said EU member countries should not have their differences with China „brushed under the carpet.“

Wang’s use of the word „contradictory“ is in line with a recently hardening of Beijing’s position, as Western countries step up calls for cooperation on carbon emissions ahead of the COP26 global climate summit in November, while tensions mount in other areas, notably the situations in Hong Kong and Xinjiang and concerns over the use of Chinese technology.

Such comments are raising questions over whether China will attempt to leverage climate cooperation in its strained overall relationship with the U.S. and Europe.

Underlining Europe’s concerns, Malta’s Bartolo launched a veiled attack at China’s approach to technology use during his talks in China.

„The world has the resources, scientific advancement and sufficient technology to feed mankind, heal most diseases and educate billions of children. It is up to the politicians to decide whether knowledge and wealth is used to liberate or enslave people, for peace and prosperity or for war and misery,“ he told Wang, according to a Maltese government readout.

Apparently echoing a joint transatlantic effort this week to name and shame China over massive cyberattacks on Microsoft servers, Bartolo added: „No country should allow its territory to wage cyber-war on other countries.“

Malta was one of only four EU countries that refused to sign a joint statement last month expressing concern over the situation in Xinjiang in the United Nations’ Human Rights Council. It is also one of the few EU members which have joined Beijing’s Belt and Road initiative, a multibillion-dollar consortium of global infrastructure plans that the EU views as a potential threat.

„China places emphasis on Malta’s geographical advantage,“ Wang told Bartolo. „We’d like to sign an implementation proposal with Malta on [Belt and Road] and make plans for a pragmatic bilateral relationship in the post-coronavirus era.“