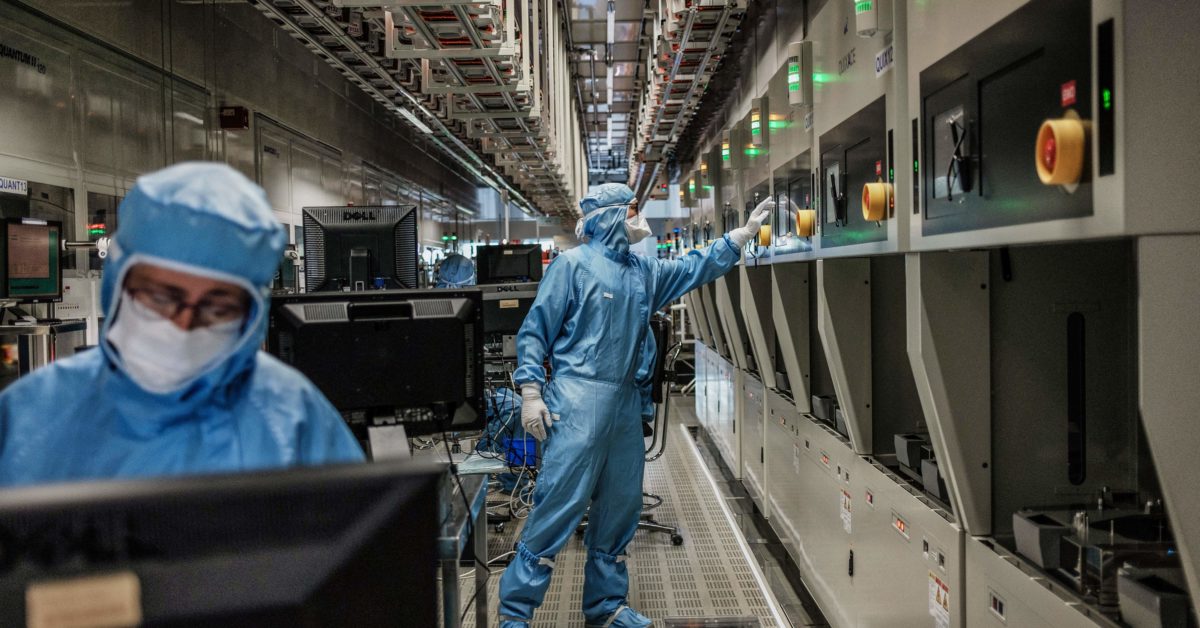 The European Union wants to put forward a subsidy package for the microchips sector that rivals the United States‘ investments.

But the plans are set to collide with the realities of the bloc’s own competition rules and slow decision-making.

Amid a global supply crunch in microchips, the EU has set the goal of catching up with U.S. and Asian powers on semiconductor technology, with a goal of acquiring 20 percent of the global market by 2030.

But the bloc is struggling to put together funding schemes that could rival similar outlays from the United States, Taiwan, South Korea or China, leaving some microchip companies skeptical about Europe’s ambitions.

A central obstacle for EU policymakers like Thierry Breton, the Frenchman who’s been leading the European Commission’s push on chips, is the bloc’s own competition rules and a longstanding tradition of keeping public subsidies to a minimum. The EU’s attempt to set up an industrial policy at this scale is unprecedented, and a make-or-break moment in whether it can keep up with global powers.

The U.S., Japan, South Korea, China and Taiwan are already competing over who can propose the most attractive subsidy packages to attract global chip manufacturers like TSMC, Intel and Samsung to set up foundries on their shores. The U.S. is finalizing a $52 billion package called the CHIPS for America Act, while South Korea presented a strategy in May that unlocked up to $450 billion in private funding, mainly through government incentives like tax breaks.

Officials in the EU and U.S. are wary of a bidding war, and issued a statement saying they „share the aim of avoiding a subsidy race and the risk of crowding out private investments,“ at their Trade and Tech Council meeting in Pittsburg September 29.

And yet, a bidding war is what’s emerged.

Keeping up with the US

The EU’s plans for the chip sector are taking shape through a few key initiatives, namely an investment plan known as an Important Project of Common European Interest (IPCEI).

The bloc has also launched an industrial alliance on microchips, while EU Commission President Ursula von der Leyen last month announced the launch of a legislative initiative, dubbed the „European Chips Act,“ to clarify how the different efforts can become cohesive.

Put together, the plans would amount to „roughly the same figure for the EU, together with our member states“ as the U.S. government’s $52 billion funding scheme, according to Breton, the EU’s internal market commissioner. „We are discussing a comparable amount of money,“ he told an online audience when visiting the U.S. in September.

That has become a mantra for the Commission: Whatever amount the U.S. puts on the table, we’ll match it, with Breton telling POLITICO in April that the EU would match a U.S. investment that was then estimated at $20-30 billion.

Show me the money

But for firms looking for the figures behind those pledges, it’s very hard to see how the EU will live up to its promise.

The Commission is working with at least 17 member countries on the new IPCEI project, announced in December 2020, that is meant to pour billions of euros into the industry via national schemes.

A lot of this money is expected to come from the EU’s coronavirus pandemic recovery funds, for which countries had to apply for and incorporate into their national recovery plans.

But an analysis of these plans by POLITICO showed 10 countries didn’t mention microchips investments at all, while five countries haven’t finalized their plans yet. Of those that pledged funding for microchips, only six countries earmarked their budget for the chips sector, while others lumped the funding together with investments in cloud, artificial intelligence and other technologies.

In total, governments so far pledged around €2.5 billion altogether in direct funding for the chips sector in their recovery plans, with another €2.3 billion of funding that chips firms will have to share with cloud technology, AI and other technology firms.

Germany is spending €3 billion on chips, local media reported, of which half is expected to come from its national recovery plan. Germany’s Economy Minister Peter Altmaier added the government could spend as much as €10 billion in the future, but it’s unclear where this funding would come from and whether the next German government would still support it.

Many of these national schemes still need the approval of the Commission’s powerful competition department, which has strict rules on what can be funded and what can’t in order to avoid market distortion.

The EU also has a preexisting IPCEI project on microelectronics, which launched in 2018 and includes €1.9 billion in funding across five participating countries. In addition, the EU launched a „Joint Understanding“ together with industry on „key digital technologies“ including on microchips which included €1.8 billion of EU funding and another proposed €1.8 billion on national governments‘ funding between 2021-2027. And it approved investments of €250 million in EU funding and the same amount from member countries within its Digital Europe research program.

Taken altogether, there’s roughly €3 billion to €5 billion in pandemic recovery funding approved by the Commission ready to go into the chips sector; another €8 billion to €9 billion in national pledges that would need the approval of the Commission’s competition officials; and an additional €6 billion in existing and incoming EU funding for the sector, a part of which has already been spent.

The bottom line: It’s unclear how Europe will rustle up much more than €20 billion in confirmed funding in the coming year.

Europe’s industrial program is likely to take many months for the funding to make it to the market.

The IPCEI process means countries must first come up with national plans before agreeing on a joint European plan. They must then call on their industries to send in bids for projects, assess those that come in and make the selections.

The Commission must review all the proposed projects to check if they comply with competition law, and national governments then have to dish out the funding.

That whole process, one government explainer document estimated, can easily take over a year and a half. But the new IPCEI on microchips could take much longer, considering the number of countries and companies involved in the process.

„The lack of timeframe for the IPCEI is one of the clear grievances of the companies,“ said Jan-Peter Kleinhans, a researcher at Berlin-based think tank Stiftung Neue Verantwortung.

If and when the funding is unlocked, EU law imposes clear limits on how it can be used too.

The funding for the chips sector is likely to be limited to research projects on cutting-edge technology. Projects funded through an IPCEI „must be of a major innovative nature,“ EU law stipulates — a safeguard to stop countries from propping up companies with state aid that distorts market competition.

Earlier this year, U.S. giant Intel said it would set up a new foundry in Europe, estimating the investment at about $20 billion in the short term, and up to €80 billion in the long term.

Its CEO, Pat Gelsinger, said that EU countries would need to come up with a support package, telling POLITICO in April the company would need about €8 billion in public support if Europe wants to be competitive.

Taiwan’s TSMC over the summer also said it was considering Germany as a location for a future factory.

„What’s unclear at the moment is how those subsidies, either for TSMC or for Intel, under which scheme they’ll be provided,“ Kleinhans said. „And the amount of subsidies that are talked about would be hard to stomach,“ he said, pointing out this would cut into research funding for Europe’s own chips machine makers, designers and other suppliers.

„The challenge when it comes to this amount of subsidies is how can we make sure that taxpayers money is being put to good use,“ Kleinhans said.