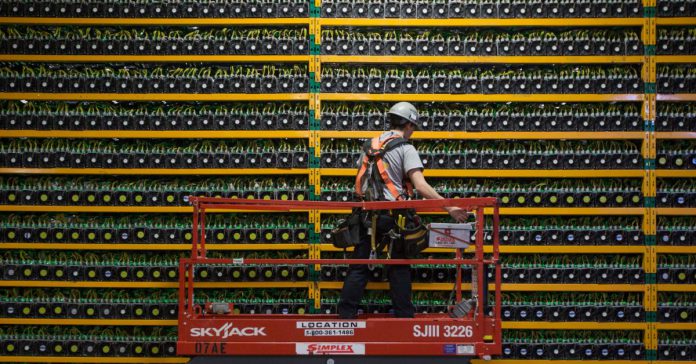 Cryptocurrencies are big business. But many of them carry a heavy carbon footprint — putting them in the crosshairs of EU policymakers now determined to tackle climate change and reduce companies‘ carbon emissions.

Bitcoin, the biggest in the cryptocurrency world, costs some $40,000 to buy one unit, putting its market value at close to $750 billion (at the time of publication). The second-most valuable is Ethereum, worth around $270 billion. The high prices have triggered a gold rush, and lawmakers are wary of sending mixed signals.

“We need consistency in the policy,” said Finnish S&D member of the European Parliament Eero Heinäluoma, pointing to Brussels’ efforts to green the EU economy and reduce carbon emissions by 55 percent over the next nine years. “It is not very credible to legitimize and boost at the same time crypto assets that are based on a technology using more energy than some member states.”

Cryptocurrencies on their own don’t release greenhouse gases into the atmosphere. It’s the technology underpinning them, known as blockchain, that does. Blockchain is a decentralized ledger that records cryptocurrency transactions with “blocks” of information, which are almost impossible to tamper with — making them very secure against outside manipulation.

Many online IOUs, called tokens, and stablecoins, which are digital assets anchored to a government-issued currency or a basket of investments, also use blockchain technology as a form of secure recordkeeping.

In the case of Bitcoin, specialized computers create one block every 10 minutes. The computers do this by crunching complex equations, which the software rewards with a handful of coins if they get the right answer. This form of block-building is called Proof of Work, known more casually as mining, and ensures Bitcoin’s scarcity. But the computing power needed to build these blocks can require huge amounts of electricity, yielding a sizeable carbon footprint.

Companies that mine Bitcoin are happy to pay massive electricity bills as long as Bitcoin holds its high value among buyers. People who want to buy things with Bitcoin also pay these companies a fee for using a block — but this income pales in comparison to the money that companies make from selling the cryptocurrency they’ve mined.

“Ten percent of income for miners comes from fees, 90 percent comes from newly created Bitcoins,” said Alex de Vries, a self-titled digiconomist who works with the Dutch central bank and has been a chief source of information for lawmakers on crypto’s carbon footprint, which he says will only get worse over time. “It’s really simple: As the price goes up, miners will make more money and will spend more money on resources.”

According to research by the University of Cambridge, Bitcoin mining across the world now consumes around 73 terawatt-hours a year. That’s more electricity than is used in a country the size of Austria or Portugal. That’s the problem lawmakers will attempt to solve. But cryptocurrency representatives warn against rules that hamper the future potential of blockchain, which could revolutionize recordkeeping in the financial industry and is still evolving into potentially less carbon-intensive iterations.

„The crypto-asset industry has been focused on its energy footprint for years,” said Francesca Salierno, executive director of the Digital Currencies Governance Group. “This is one of the main drivers behind the evolution of new blockchains, like Ethereum, whose carbon footprint was less than half that of the Bitcoin blockchain in mid-2021.”

Ethereum is preparing to move from its Proof of Work block-building system to a quasi-lottery program that rewards people, or companies, that hold large amounts of its cryptocurrency, Ether. This alternative reward system is called Proof of Stake, and it doesn’t require energy-hungry computers to make difficult calculations. Instead, the more Ethers you own, the more likely it is that you’ll get more. German Green lawmaker Sven Giegold has heralded Ethereum’s shift as an example of what setting thresholds for energy use can achieve.

„If we talk about just the environmental system, Proof of Stake fixes the problem,“ de Vries said. „In a Proof of Stake system, the bigger your share, the bigger the chances of winning. That can lead to concentration. But it’s always a limited amount of players [that win in either system] in some way, despite the idea that these cryptocurrencies can be decentralized.“

Can MiCA make a difference?

As cryptocurrencies continue to rack up emissions, EU lawmakers are teeing up legislative remedies in an effort to get their carbon footprints under control.

Finland’s Heinäluoma is among a handful of MEPs who have drafted green amendments for a bill, called the Markets in Crypto-Assets regulation, going through the EU legislative machine. The European Commission proposed MiCA last year to introduce consumer safeguards for people who buy digital financial assets after Facebook announced plans to introduce its own virtual currency, called Diem. The bill targets the trading of tokens and stablecoins and has little to do with blockchain. However, it’s the first bill of its kind, and lawmakers are hoping the final rules in MiCA will set the global standard for digital assets — including their energy consumption.

“For me, the whole world is looking to MiCA and if we put some [green] principles in it, it will make some difference,” said German MEP Stefan Berger of the center-right European People’s Party, who’s shepherding MiCA through Parliament. As rapporteur of the file, it’ll be up to him to produce compromises in September from the amendments he’s received. Those amendments range from disclosure requirements on energy consumption to the Greens’ suggestion of setting minimum energy standards for crypto assets, like those for kitchen appliances. Any digital assets that breach those standards would eventually be banned.

Berger has yet to make up his mind on the best approach, although he sees merit in requiring crypto-asset providers to outline how much energy they need to run. “We do not need new technologies that waste energy,” he said.

New Data: Nearly Half of Schools Providing Home Internet Access to Students Who Need It This School Year

US expected to publish Privacy Shield executive order next week

Putting trust at the heart of public services