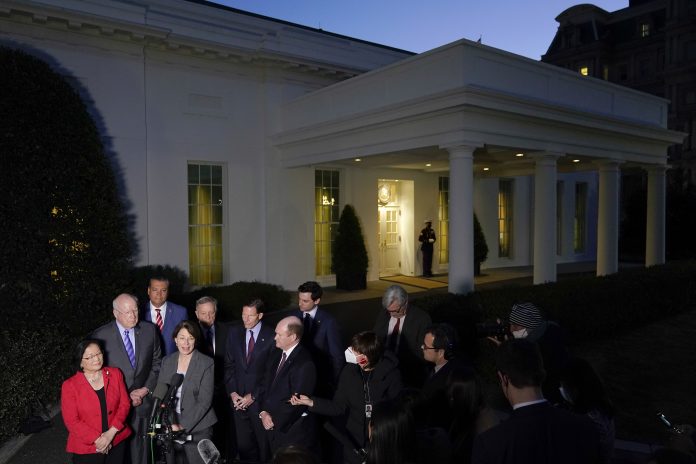 “At one point, Ben Sasse said that he was so mad at me he wanted to hit me,” Whitehouse recalled in an interview. “We went and we sat, actually, in the committee room where people could see us while we were in one of those discussions. And I explained to him the facts … he said, ‘Well, if that’s what happened, then you’re right. I have no reason to be mad.’”

Whitehouse said he and the Nebraska Republican are now fine. But Sasse spokesperson James Wegmann accused the Rhode Island Democrat of “peddling bullshit conspiracy theories” during the Kavanaugh confirmation, adding that “there was no agreement, and to this day I’m sure he thinks Whitehouse’s behavior was despicable.”

It’s hard to overstate how personal the animosity on the Senate Judiciary Committee became during the Kavanaugh fight, as late-breaking accusations of sexual assault against the judge pitted furious Democrat against seething Republican. Those tensions still ripple through the panel as it prepares to consider the nation’s first Black woman Supreme Court nominee this year.

Judiciary members on both sides of the aisle predict that the still-unnamed nominee’s confirmation hearing will be civil. But the panel’s handling of her forthcoming selection by Joe Biden, the first former Judiciary chair in modern history to send the chamber a Supreme Court hopeful, will challenge senators to set a new tone with each other — and the pick herself. Washington will be watching whether the often contentious committee can offer the public a less divisive and politicized image of the high court.

In interviews, members of the Judiciary Committee acknowledged that the committee can get heated even outside of its Supreme Court fights, with Sen. Lindsey Graham (R-S.C.) noting that “it’s not the place for the faint-hearted.” The panel, after all, is made up mostly of lawyers and has jurisdiction over some of the most divisive issues in American politics, including abortion and guns. And it tends to attract members whose ambitions lie higher than the Senate.

Now-Vice President Kamala Harris, along with Sens. Cory Booker (D-N.J.) and Amy Klobuchar (D-Minn.), each had memorable rounds of questioning during the Kavanaugh hearings — and all later launched campaigns for the White House in 2020. This time around, several Judiciary panel Republicans are considered potential future presidential contenders, including Sens. Josh Hawley of Missouri, Tom Cotton of Arkansas, Cruz and Sasse.

Booker said Republicans “have their people running for president now, obviously that’s a platform for them,” even as he generally described relationships between Republicans and Democrats on the committee right now as “very good.”

His own breakout moment during the Kavanaugh confirmation came as he vowed to release once-confidential records about Kavanaugh’s years in George W. Bush’s White House, likening himself to the Roman-era rebel leader Spartacus. Sen. John Cornyn (R-Texas) threatened to oust him from the Senate during that tit-for-tat nearly four years ago, but Booker said he and Cornyn mended fences quickly.

“The next day, he just stuck out his hand and said ‚look, I was always taught to hate the sin, not the sinner,’” Booker said. “And we shook hands. And he and I still work together.”

Members of both parties view the fraught Kavanaugh debate as the panel’s worst period in recent memory, even as they say most senators have moved on. Nevertheless, neither side holds back when asked about the handling of the justice’s confirmation.

“I am one of the people that they consider having treated [Kavanaugh] horribly, and that is why Josh Hawley can go on Fox News and say: ‘Oh, I can only imagine what kind of a hearing we’re going to have with Sen. Hirono there,’” said Sen. Mazie Hirono (D-Hawaii).

Replying to Hawley, she quipped: “I just want to say, what the heck? You are an insurrectionist. Come on. Give me a break.”

Hawley, who described the Judiciary Committee as his “most contentious” assignment in the Senate, responded: “I wish her well.”

Despite the tension surrounding judicial nominations and the sharp elbows that come out during confirmation fights, the Judiciary Committee is also home to some of the most consequential legislation Congress has passed in years. In 2018, the Senate approved a sweeping criminal justice reform bill that originated in the panel. More recently, the Senate passed by voice vote Judiciary-approved legislation that eliminates private-sector forced arbitration for victims of sexual assault and harassment. The committee last month approved a tech antitrust bill.

Republicans and Democrats alike attribute that productivity to their relationships on the other side of the aisle, easily identifying legislative partners they enjoy working with. Booker cited his push with Sen. Thom Tillis (R-N.C.) to eliminate the sentencing disparity for drug offenses stemming from possession of powder cocaine versus crack cocaine. Tillis mentioned his work with Hirono on intellectual property.

“These are life-and-death, political gut issues that we deal with,” Durbin said. “People would be surprised at how good Democratic relationships are with many Republican members. But I would be misleading you if I said it was with all the members. There are some that are just not easy to work with.”

Grassley, meanwhile, said that “If there’s anything negative about that relationship” between Democrats and Republicans on the committee, “it’s entirely just related to the Kavanaugh hearing. It doesn’t go any further.”

The upcoming Supreme Court confirmation fight will mark the first time Democrats have a chance to fill a vacancy on the high court since the GOP blocked then-President Barack Obama’s picking Merrick Garland in 2016.

While some Republicans have criticized Biden for pledging to nominate a Black woman to the court, most of the Senate GOP has refrained from weighing in so far. And even though the Judiciary Committee has a history of tough confirmation fights, Biden’s pick may yet be an exception. Whomever Biden nominates won’t fundamentally shift the court’s 6-3 balance, and Democrats can confirm the nominee without Republican votes.

“From a Republican perspective, there is not a lot to be gained by having a big, knock-down, dragged-out fight over this nominee,” Whitehouse said. “That would suggest a general level of calm and it also allows them to say ‘See, we’re good people about this stuff. Whereas you were mean, mean, mean to that nice, wonderful Brett Kavanaugh.”

Burgess Everett contributed to this report.

Why Manchin backed off on his top priority