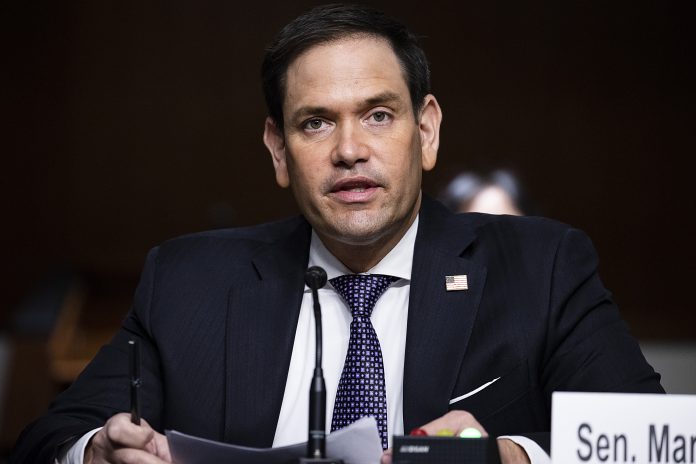 In two short weeks, as the U.S. warns of a potentially imminent Russian invasion of Ukraine, Congress’ bipartisan sanctions talks have gone from “the one-yard line” to a slow-motion fumble.

Senators are now poised to pause their negotiations over punishment for Moscow — designed to deter military action that some see as inevitable — and instead pass a non-binding resolution affirming Ukraine’s sovereignty before leaving Washington for a week-long recess. That anticlimactic conclusion to a month-long frenzy came after senators and their aides faced repeated roadblocks, leaving both parties with little to show except promises that they would act more quickly after any possible Russian incursion.

“At this moment, this appears to be moving a lot faster than our congressional process,” Senate Intelligence Committee Vice Chair Marco Rubio (R-Fla.) said. “But I don’t want anyone to believe that somehow the U.S. won’t be able to respond with sanctions along with our allies if there is an invasion. The administration has the authority now under the law to impose those sanctions.

The discussions fizzled out as senators proved unable to resolve key disagreements stemming from a bitterly partisan vote last month on sanctioning the Russia-to-Germany Nord Stream 2 gas pipeline. And last week, just as a deal seemed within reach, European officials raised alarm over a specific sanctions proposal under consideration on Capitol Hill that could roil markets on the continent, underscoring the fragility surrounding the Biden administration’s vows of multilateral unity in the face of Russia’s aggression.

Senators, of course, are loath to point fingers outside their own national borders when it comes to the reasons why the sanctions push has fallen short so far. But Republicans are now acting on their own to press their perspective: Sen. Jim Risch of Idaho, the Foreign Relations Committee’s top GOP member, on Tuesday offered his own plan that includes many of the provisions the two parties have already agreed on.

Risch’s bill, which boasts other GOP buy-in, goes further than the bipartisan negotiators have in some respects, to include sanctions on Russian financial institutions and so-called “secondary sanctions” that have drawn skepticism from European partners.

“Everybody around here is talking tough,” Risch said. “This is an opportunity for them.”

Senate Foreign Relations Committee Chair Bob Menendez (D-N.J.) and Risch have been leading the talks on sanctioning Russian President Vladimir Putin’s government as he moves troops closer to the Ukrainian border. The group came to an agreement on key provisions including emergency lethal aid, cybersecurity defenses, and a lend-lease program to send weapons and other supplies to Ukraine — before larger disagreements took hold.

Menendez said he sent Risch another offer on Monday that was closer to the GOP position, but Risch said Tuesday morning that he hadn’t yet sent a response.

“We really ran into more and more complexities as we got into this,” said Sen. Chris Murphy (D-Conn.), a member of the negotiating group. “Everybody had good intentions, but this is a really tricky combination of pre- and post-invasion sanctions, as well as questions of authorities that the administration needs and doesn’t need.”

Risch warned that the Kremlin is “watching us over there.” Yet he added a note of optimism in the event of a worst-case scenario: “If there is an invasion, there isn’t going to be a whole lot of space between Republicans and Democrats as far as where we’re going.”

As a backstop answer to Russia as the Senate stares down a recess out of Washington, the chamber will attempt before the end of the week to pass a symbolic resolution with the goal of putting forward a united front. Party leaders and relevant committee chiefs on both sides of the aisle are also crafting a statement on the matter that could be released as soon as Tuesday afternoon, according to senators familiar with the talks.

“We’re going to leave here this week, so either we’re going to have a sanctions package … or we should express the Senate’s position vis-a-vis the situation in Ukraine, at a minimum, before we leave,” Menendez said.

The latter situation Menendez outlined is far more likely. Even if an agreement on a sanctions bill could be clinched this week, it could take up to a week for the measure to work its way through Senate procedures. On top of that, the House isn’t returning to Washington until Feb. 28.

“We’re on the same page. We’re just not on the same paragraph,” Rubio posited. “Look, we’re not the Duma … This is a real republic where people have differences of opinion and we have a process that works through it.”

Neither a non-binding resolution or a leadership statement will have the teeth behind it that senators had hoped for. Risch acknowledged on Tuesday that those measures are “not as powerful as sanctions.” And as the bipartisan talks have stalled, senators are beginning to acknowledge that President Joe Biden already has broad power to impose many of the sanctions that would have been prescribed in their legislation anyway.

Senators are still holding out hope that Congress could pass a sanctions bill after any invasion, adding punch to what the Biden administration has said would be a significant blow to the Russian economy if Putin moves into Ukraine.

“Putin’s not waiting around to see what the Senate does,” Murphy added. “There’s nothing to say we can’t pass this legislation to give him the authorities if he doesn’t have them and needs them, even after an invasion.”

It’s rare these days for the Senate to stall on major legislation to punish Russia. After Moscow meddled in the 2016 election, the chamber adopted a sanctions package by a vote on 98-2. And when then-President Donald Trump refused to fully implement some of the sanctions, lawmakers from both parties pushed back.

This time around, lawmakers appear to be giving more deference to the executive. Even though an invasion has yet to occur, members of both parties are generally taking Biden at his word that he will impose a crushing array of sanctions targeting Moscow if its troops move into Ukraine.

Pelosi: Continuing resolution ‘would be a last resort’