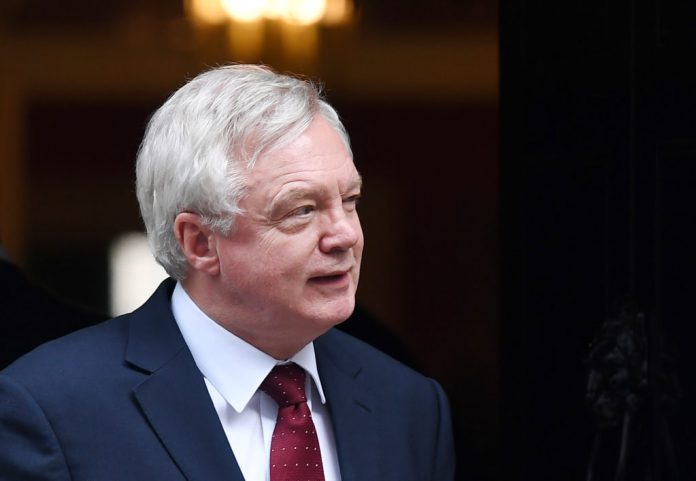 LONDON — The U.K. government began courting U.S. data and surveillance firm Palantir to work on ways to tap patient data from the National Health Service back in January 2019, according to documents seen by POLITICO that shed light on the relationship with the company.

The documents show the government pitched access to NHS data earlier than has previously been reported — and a year before Palantir won a controversial contract to mine the NHS’s COVID-19 patient data.

In a meeting at the exclusive get-together of business leaders and policymakers in Davos, Switzerland, that year, former Trade Secretary Liam Fox encouraged the U.S. data giant’s executives to make use of “untapped” NHS data.

Internal emails, meeting briefings and readouts obtained through freedom of information law show ministers and officials making direct references to the potential of Britain’s health service as they tried to drum up inward investment.

The findings come amid controversy over Palantir’s involvement in the NHS and as privacy campaigners accuse Whitehall of presiding over a health “data grab.”

When the coronavirus pandemic hit the U.K. in 2020, the NHS awarded the data analytics company an emergency, no-competition contract to mine its COVID-19 patient data in a bid to help the country stay one step ahead of the outbreak.

But the latest documents have raised questions among campaigners critical of what they see as Palantir’s “cosy” access to government. Its coronavirus-related contract is now valued at upwards of £23.5 million and was extended for two more years last December.

Cori Crider, founding director of the legal NGO Foxglove, said the releases show the government “pitching a monetised NHS data system to the likes of Palantir years before the public were told.”

“It’s astonishing to see a U.K. Cabinet minister chatting at Davos to Palantir and other tech executives about health data as an ‘untapped’ goldmine that they want to let industry into to the tune of £1 billion a year,” Crider said.

This month, Foxglove and other campaigners helped delay an NHS patient data program to pool the medical records of 55 million patients in England — including physical, sexual and mental health histories — into a single database that researchers and potentially private global firms could mine.

Including General Practice Data for Planning and Research (GPDPR) — data collected by family doctors — the database would be the largest set of structured, machine-readable, population-wide, cradle-to-grave health data on the planet.

Speaking out against the plans in the House of Commons last week, former Conservative Brexit Secretary David Davis said: “Patient trust is vital to our NHS, so foreign tech companies such as Palantir, with their history of supporting mass surveillance, assisting in drone strikes, immigration raids and predictive policing, must not be placed at the heart of our NHS.”

Then Health Secretary Matt Hancock — who resigned Saturday after video emerged of him kissing an aide in breach of COVID-19 rules — tried to reassure Davis that the plan “will be underpinned by the highest standards of safety and security.” Hancock reminded him that NHS data analysis will benefit public health.

“The proper use of data has the potential to save hundreds of thousands of lives if we use it as safely as possible but also allow for the insights in the data to be discovered in order to promote better healthcare, better discoveries and the better operation of the NHS.”

A spokesperson for the company said: „Palantir does not collect, copy or control any data. As such when the NHS licenses our software, their data is not ‘shared’ with Palantir, nor are we ‘granted access’ to NHS data. What this means in practice is the NHS always retains full autonomy over who can access their data and for what purposes the data can be used.“

Throughout the pandemic, Palantir’s Foundry software has been used in health care systems throughout Europe — including the U.K. — as governments struggled to gather and analyze large, separate, databases of patient information and predict where resources would be needed.

Firms that have a commercial relationship with the NHS, such as Palantir, are expected to be able to access Britain’s new database.

The public could originally opt-out of having their data used until June 23, but this deadline was extended to September by NHS Digital after fierce pushback from campaigners and Conservative politicians.

The firm, founded in 2014, is also controversial because its co-founder, PayPal billionaire Peter Thiel, was an adviser and financial backer of Donald Trump during his 2016 U.S. presidential campaign. In 2009, Thiel wrote that he “no longer believe[s] that freedom and democracy are compatible.” He also condemns “confiscatory taxes” that support government programs. The company also had a hand in building the intrusive global surveillance capabilities of the U.S. National Security Agency.

The heavily-redacted government documents shed new light on how the relationship between Palatir and the U.K.’s trade department began and developed. They show that Fox, the then-British trade secretary, met privately with Palantir’s U.K. chief Louis Mosley at Davos on January 19, 2019.

The pair “discussed the connectivity of Palantir software in relation to [REDACTED] and noted the strategic benefit of working with the UK [REDACTED] and the uses of connecting data,” according to a censored Department for International Trade (DIT) email summarizing Mosley’s meetings with Fox. Fox “noted his interest in the work of Palantir and its possible benefits to government.”

“We have a huge and as yet untapped resource through the UK’s single healthcare system,” Fox’s briefing notes instructed him to tell the group. “We aim to treble industry contract and R&D collaborative research in the NHS over ten years, to nearly £1 billion.”

At Fox’s direction, the trade department’s „Science and Scenarios“ team then met Palantir on March 4, 2019. A month later, the trade department’s then-most senior civil servant Antonia Romeo met with Mosley and other Palantir staff in her office. Briefing notes state she should underscore Fox’s interest “in Palantir’s products and the potential benefits to government and the UK’s health service.”

Romeo briefed Mosley on NHSX, a spin-off of the health service which she pitched as working to “bring the benefits of modern technology to patients and clinicians” and “create the most advanced health and care service in the world.”

The trade department’s objective in the meeting, according to briefing notes, was to offer government “assistance” to the firm and get them “to expand their software business” in the U.K. Romeo was also directed to request Palantir make its first public stock offering on the London Stock Exchange.

A readout from the meeting shows Romeo “emphasised that DIT wanted to have a relationship with Palantir.” A government analysis of Palantir’s objectives in the meetings states that the firm would “want to use this meeting to increase Palantir’s profile with [the government] and an awareness of their solution offerings.”

By July 2, 2019, chair of NHS England David Prior was drinking watermelon cocktails with Mosley at a private dinner the Palantir boss hosted to mark the launch of NHSX, according to the Bureau of Investigative Journalism.

On the same day, Palantir was added as a supplier to the government’s approved list of cloud technology contractors, a spokesperson for the U.K.’s government contract tendering body, the Crown Commercial Service (CCS), said. Less than a year later, on January 14, 2020, Prior visited Palantir’s San Francisco headquarters and saw a demonstration of Palantir Foundry.

“What these meetings show is a marked shift by the U.K. government towards developing ongoing, co-dependent relationships with preferred technology companies, seemingly bypassing established public procurement processes,” said Lucie Audibert, a lawyer and legal officer at Privacy International. “Why Palantir deserves such extensive courting by the U.K. government, at the detriment of accountability and fairness in public procurement and public service delivery, we still don’t know.”

A spokesperson for the trade department said „it is wrong to say that the department went beyond its remit“ and that it is “standard practice“ for its officials engage with businesses.

Nevertheless, the future of the nation’s health data, Crider said, “should be robustly debated in the halls of Parliament and the living rooms of our country, not sorted between ministers and tech executives over watermelon cocktails and cosy Davos chats.”