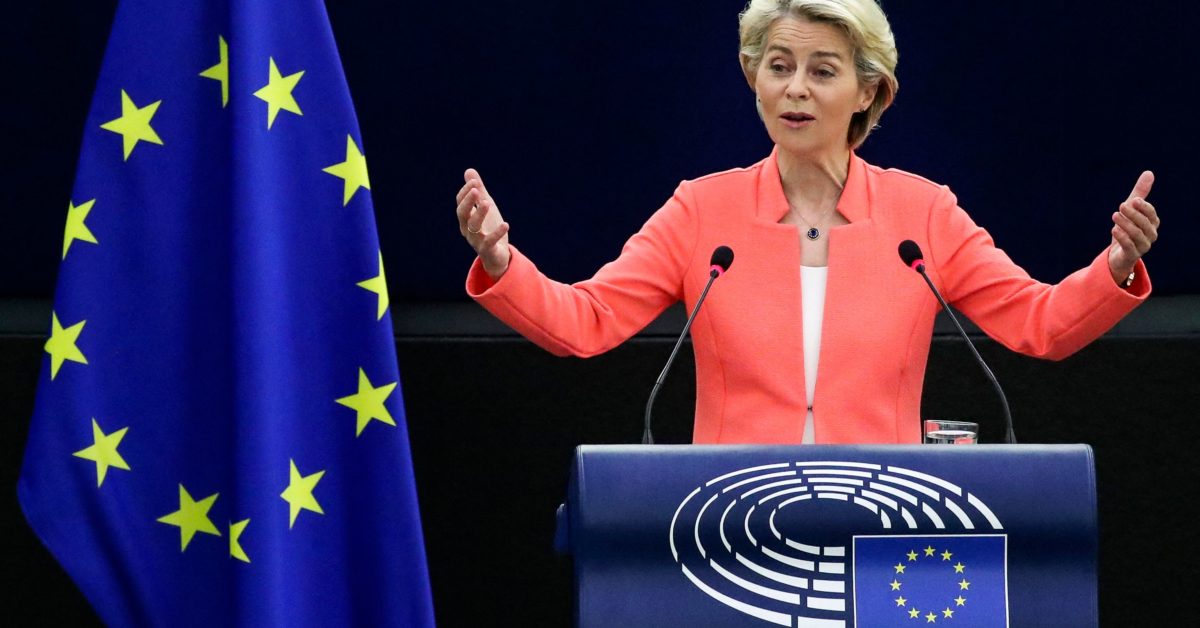 That tells you which country is looming largest behind the EU’s core priorities.

Von der Leyen’s speech promised a European counterblast to China’s Belt and Road infrastructure projects, a scheme to keep the Continent in the global microchip race and legislation to ban the import of goods produced with forced labor.

Beijing will be watching all of these files with a close eye.

When it came to referencing China’s leader by name, von der Leyen was initially complimentary, saying „the [climate] goals that President Xi has set for China are encouraging.“

But it didn’t take long for the German politician to branch into the EU’s growing unease about the rise of China, with many in the audience in the European Parliament still smarting over Beijing’s sanctions on their colleagues.

Her tone immediately started to toughen. „We call for that same leadership on setting out how China will get there. The world would be relieved if they showed they could peak emissions by mid-decade — and move away from coal at home and abroad,“ she continued.

This was a direct criticism. China has been cautious about increased pledges on climate, amid worries about supply insecurity should coal be phased out too rapidly. In fact, Xi visited a coal plant only a day before her speech, focusing not on eliminating coal but on „upgrading“ the use of what China calls green coal.

Climate is far from von der Leyen’s only concern with regards to China, and the overall tenor of Wednesday’s speech marked a stark contrast from just nine months ago when the EU was celebrating the political conclusion of a landmark investment deal with Xi.

The Commission chief also unveiled the „Global Gateway“ scheme to take on Beijing’s Belt and Road Initiative — in which Beijing flexes its geostrategic muscle by investing in transport infrastructure to link its mighty exports to Western markets.

Von der Leyen said the EU needed its own vision and had to stop doing China’s work for it.

„We are good at financing roads. But it does not make sense for Europe to build a perfect road between a Chinese-owned copper mine and a Chinese-owned harbor,“ she said.

On forced labor, von der Leyen said it’s time for the EU to have a ban on import goods produced by prisoners and camp inmates — a step up from her trade commissioner’s preference for a less restrictive „due diligence“ scheme. This is of major importance to China as it would be likely to target goods from the western region of Xinjiang, where there is a large-scale crackdown against the Muslim minorities.

“We will propose a ban on products on our market that have been made with forced labor because human rights are not for sale, at any price,” von der Leyen told Parliament.

It remains unclear how the Commission can establish whether or not goods are produced by forced labor as Xinjiang is largely off-limit to Western diplomats and international human rights groups.

She also vowed to turbocharge the EU microchip industry to catch up with rivals like the U.S. and China via a new “Chips Act,” a move that tech-minded geopolitical policymakers say would be necessary to prevent EU reliance on Chinese 5G mobile technology.

Reaching out to corral a wider anti-China alliance, von der Leyen also announced the Indo-Pacific strategy on Wednesday, a geopolitical concept that the U.S. and some Asian countries have deployed to muster a stronger bloc to confront China.

„If Europe is to become a more active global player, it also needs to focus on the next generation of partnerships,“ she said. „In this spirit, today’s new EU-Indo Pacific strategy is a milestone. It reflects the growing importance of the region to our prosperity and security. But also the fact that autocratic regimes use it to try to expand their influence.“