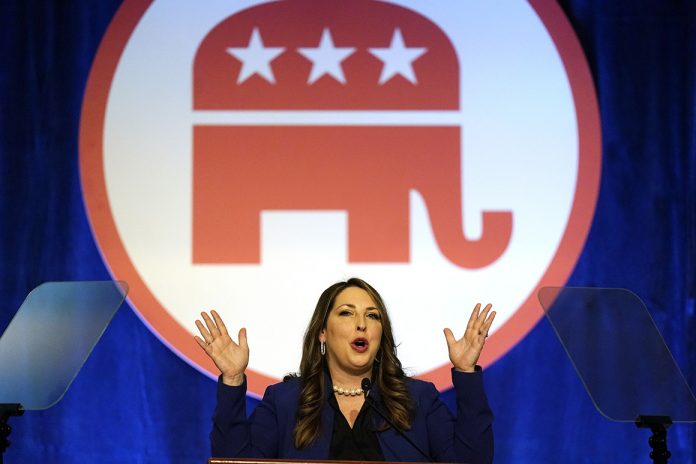 The Republican National Committee’s attempt to unwind the controversy over its characterization of Jan. 6, 2021, as “legitimate political discourse” may have given investigators of the Capitol riot an underappreciated piece of the puzzle they’re assembling.

According to RNC chair Ronna McDaniel, the phrase “legitimate political discourse” — part of a resolution censuring Reps. Liz Cheney (R-Wyo.) and Adam Kinzinger (R-Ill.) for participating in the select committee probing Donald Trump’s role in Jan. 6 — was a reference to a set of nonviolent GOP activists with close ties to the national party.

Those activists were relatively small in number compared with the thousands who breached the Capitol: They were dozens of state and local GOP leaders who agreed to serve as electors for Trump and signed false documents claiming the former president had prevailed in at least five states that Joe Biden won. In McDaniel’s telling, those Republican activists were engaging in “legitimate” discourse by signing the false certificates and sending them to Washington, a crucial facet of Trump’s last-ditch plan to subvert the 2020 election.

Those same signatures are now being reviewed by federal prosecutors for potential crimes, senior Justice Department officials say — though it’s unclear if the individual false electors knew about Trump’s broader plan. That question is very much on the minds of the Jan. 6 select committee, which subpoenaed 14 of the false electors even before the RNC approved censure language that notably defends their actions.

Here’s a look at how the false electors figured into Trump’s effort and why the national Republican Party’s claim that they were engaging in “legitimate political discourse” is more eye-opening than it initially appears.

Who are the GOP ‚false electors‘?

Before every presidential-election November, both parties spend the spring and summer appointing slates of electors in all 50 states and D.C. The winner of each state’s popular vote on Election Day determines which electors will later gather to formally choose the president, as required by the Constitution.

In 2020, the GOP’s electors were a mishmash of state and local party leaders, prominent activists, state lawmakers and close allies of Donald Trump. The party paid more attention than ever to its electors after a chaotic 2016, when anti-Trump activists held many of the often-overlooked posts.

One Michigan Republican elector in particular, Kathy Berden, is at the forefront of the RNC’s attempt to define “legitimate political discourse” after it had become a national controversy. McDaniel has referenced Berden’s case — the latter woman was subpoenaed by the Jan. 6 select committee for her role as a false elector for Trump — in explaining the rationale behind the choice of the „legitimate“ phrasing in the party’s resolution.

Berden, a longtime McDaniel ally and RNC member, served as an „alternate elector … with clear legal precedent,“ the party chair said in an op-ed last week as the Cheney-Kinzinger censure furor flared. „Now she could face costly legal bills even though she was nowhere near the Capitol on January 6th and had nothing to do with the violence that occurred.“

On Dec. 14, 2020, Berden oversaw a meeting of illegitimate Trump electors in Michigan despite its certification for Biden the previous month. She also signed documents attesting that Trump had won the state which were delivered to Congress, the National Archives and a federal judge.

McDaniel has avowed, per the Washington Post, that the recently widowed Berden is a victim of an overzealous select committee investigation targeting “ordinary citizens” who were doing what the Trump campaign asked.

Another RNC member who signed false elector certificates is Arizona GOP chair Kelli Ward, whose phone records have been sought by the Jan. 6 committee, though she has not been directly subpoenaed.

Asked for comment, an RNC spokesperson pointed to McDaniel’s public comments on the episode, including last week’s op-ed.

What did the false electors do?

The federal law known as the Electoral Count Act requires legitimate electors to meet on the “first Monday after the second Wednesday in December” in each state’s capital, as well as in D.C. That date, in 2020, was Dec. 14 — the same day that Trump’s losing GOP slates of electors also gathered in five states won by Biden — Arizona, Georgia, Michigan, Nevada and Wisconsin.

The illegitimate electors acted as if Trump had been victorious in their states, signing certificates claiming to be “duly elected and qualified” to represent their home areas.

This, they noted at the time, had some precedent. In 1960, Hawaii Democrats made a similar decision in a close race between Richard Nixon and John F. Kennedy. Nixon had been certified the state’s winner, but amid an ongoing recount, its three Democratic electors met and signed certificates that went to Washington. The recount later backed them up.

Republican leaders today are relying on the Hawaii precedent to say their actions in 2020 were reasonable.

Unlike 1960, the Trump electors attempted to overturn races that weren’t particularly close by modern standards. Biden was ahead of Trump by tens of thousands of votes in each of the contested states, and the legal system had thrown out nearly every attempt by the defeated president and his allies to reverse the outcome.

But Trump still needed his allies to cast their false electoral votes for a different reason: They preserved his last-ditch attempt to overturn the election on Jan. 6, 2021. That’s the day that Congress met and counted electoral votes submitted by the states, as required by law.

The law also requires that when states submit multiple slates of electors, Congress chooses which ones to count — if any. In Trump’s view, a position rejected by most historians and legal scholars, Vice President Mike Pence (who presided over the count) had the authority to refuse to tally Biden’s electors in the disputed states. Part of that rationale relied on the existence of the false elector slates, including Berden’s.

John Eastman, an attorney advising Trump on this strategy, laid it out in a two-page memo that specifically cited the existence of “multiple slates of electors.”

That scenario depended on creating a false conflict for Pence, who as the presiding officer could have attempted to recognize the illegitimate electors. Pence of course, decided to ignore that effort and recognize only the legitimate Biden electors as approved by a state government authority.

In the year since Pence’s move, the Trump campaign’s outsize role in crafting the legal strategy behind the false elector gambit has become clearer to the select committee. State parties at the time cited the Trump campaign as the source of the decision to hold illegitimate elector meetings in states Biden won.

When the Trump electors met on Dec. 14, 2020, 15 of the GOP’s original elector picks were absent from the proceedings. That required those who remained to appoint replacements.

POLITICO reached out at the time to a dozen of the dropouts to ask why they didn’t participate in the Trump-backed effort. Marino declined to comment. Another, Patrick Gartland of Georgia, said his absence was the result of a personal matter as well as a recent appointment to a local election board that presented a conflict of interest. The rest did not respond to requests for comment about the reason they declined to back Trump’s plan.

Marino’s replacement, GOP gubernatorial candidate Charlie Gerow, said it was his idea — devised along with several other lawyers involved in the process — to include Pennsylvania’s caveat that the Trump electors would only be counted if courts ruled in their favor.

“We put in the contingent language, quite bluntly, because I and several others in the room who were lawyers insisted upon it,” said Gerow.

Sinema switches to independent, shaking up the Senate