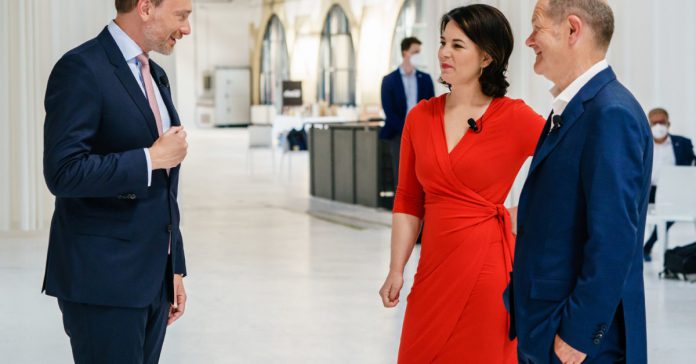 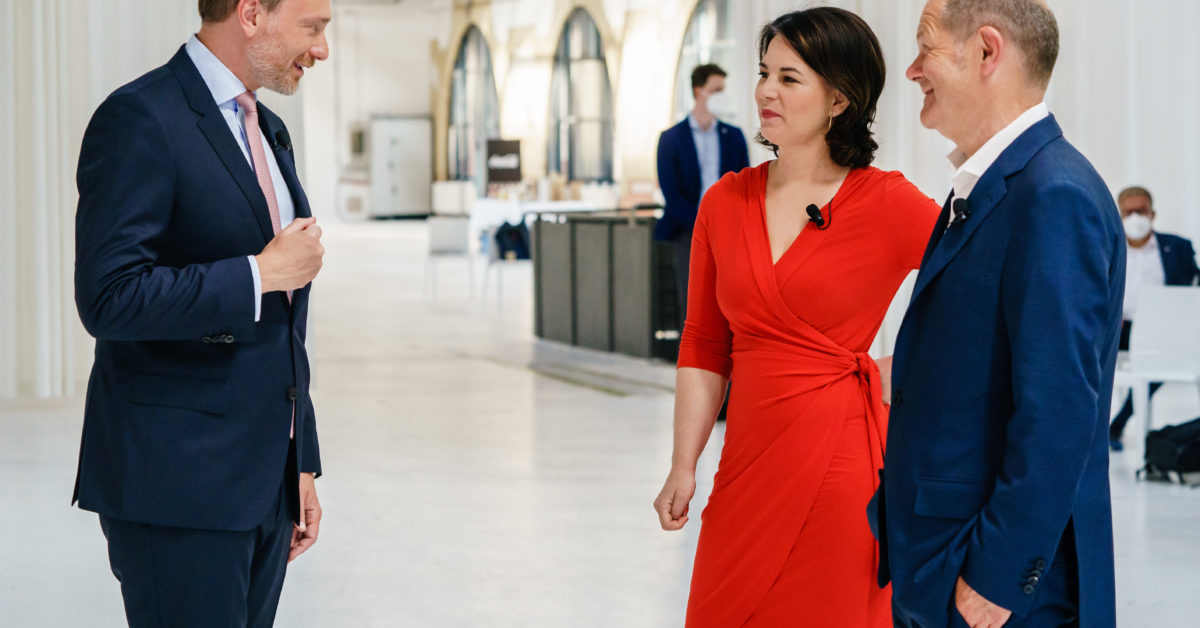 The first phase of talks on forming a new German government has begun, and the smaller parties are setting the agenda.

While both the Social Democrats, who came first in Sunday’s election, and the second-placed conservative CDU/CSU bloc hope to lead the next government, they can only do so if they can form an alliance with the parties that finished third and fourth — the Greens and the liberal Free Democrats (barring another grand coalition between the two bigger camps, which is not considered as an option for now).

The two smaller parties sought to make the most of their newfound influence by launching talks among themselves on Tuesday evening. On Wednesday, they announced they would hold more in-depth discussions on Friday, and only after that will they move on to talks with the SPD and/or the CDU/CSU.

“In search for a government, we are exploring common ground and bridges over dividing lines. And even finding some. Exciting times,” read an Instagram post featuring a photo of Green party co-leaders Annalena Baerbock and Robert Habeck, as well as FDP chair Christian Lindner and his party’s Secretary-General Volker Wissing, posted late Tuesday.

But the upbeat words can’t hide that the Greens and FDP have major differences to overcome, especially on financial matters: The Greens want to raise taxes for the rich, while the FDP promised its voters the opposite. In addition, the FDP wants to lower taxes for companies to turbocharge the economy while the Greens want the government to have more money in hand to finance the green transition.

There are, however, also some issues on which the Greens and FDP aren’t too far apart.

Here’s a look at their common ground and big differences in four key policy areas:

When it comes to civil rights and liberties, „there is a great deal of overlap“ between the parties „as they have progressive positions and push for reforms in this policy area,“ said Marc Debus, a politics professor at Mannheim University.

For example, both the Greens and FDP promote gender equality, want to legalize cannabis, lower the voting age to 16 and cancel Germany’s mandatory retention of internet user data. Both parties have also criticized the current grand coalition of CDU/CSU and SPD for introducing biometrical facial recognition and allowing security services to hack into suspects‘ computers or mobile phones to read messages and access files.

In the field of national security, such as fighting terrorism, there are „no fundamental differences either,“ said Uwe Jun, a professor from Trier University who specializes in comparing political parties. The two have differences on migration but they could be bridged. „The FDP is somewhat more restrictive than the Greens and wants to tie migration more strongly to qualifications, but there is no insurmountable gap between the two parties,“ Jun argued.

“We and the Greens are united by the fact that we led an election campaign for reforms,“ said Nicola Beer, a deputy leader of the FDP. „Both parties want changes and modernization in education policy, in digitalization.”

Political scientist Jun agreed, stressing both parties have campaigned for investments in these fields. „They will reach an agreement relatively quickly,“ he said.

The Greens and FDP both say they want to strengthen the European Union, and particularly the European Parliament. They also both want to make the EU’s foreign policy more efficient.

During a TV debate ahead of the election, both Baerbock and Lindner stressed the importance of human rights when dealing with countries like China and Russia, and criticized the German government for having focused too much on the interests of Germany’s export industry when dealing with foreign powers. They both criticized the EU’s investment deal with China.

Franziska Brantner, the Greens‘ spokesperson for European affairs, said she also saw common ground in dealing with the EU’s growing rule-of-law problems in Poland and Hungary. „Both parties stand for the rule of law and strengthening democracies,“ she said.

However, Brantner stressed that in other parts of EU policy there was still a lot of work ahead.

„I see major differences in the will to reform the European stability and debt rules, and the question of how to finance the investments in innovation and infrastructure needed for digitization and climate protection,“ she said, referring to Lindner’s ambitions to become Germany’s next finance minister — a role he wants to use to push for strict fiscal rules.

„There are also still unanswered questions regarding the creation of a common European industrial policy,“ Brantner said. „The issue is very important to us, but so far I have always heard opposition from the FDP.“

Both parties agree on the need to tackle climate change, but have very different approaches: While the Greens push for stronger laws or even bans to force a shift to more climate-friendly means of production and transport, the FDP focuses on market-based solutions and wants to cut red tape to allow companies to invest in emissions-free technologies such as hydrogen wind turbines.

„We agree on the goals but still need to talk about the appropriate measures,“ said the FDP’s Beer.

At least there are some starting points: Both parties, for example, support higher prices for carbon dioxide emissions via the existing emissions trading system. They also both want to use the money from these certificates to finance social measures to support low-income families and cushion the impact of job losses due to the green transition. The big difference to overcome is whether the price of such certificates should be determined by the market, as the FDP wants, or set by the state.

According to political scientist Jun, both sides could strike a compromise on how to finance new climate protection initiatives. He said the FDP was „in principle“ open to the idea of creating an investment fund that would lend money on the markets strictly bound to investments for future tasks like climate measures, infrastructure or digitalization.

„The idea is that such investments would benefit the next generations. This distinguishes them from ordinary public debt, which the FDP always denounces as a burden for future generations,“ Jun said.

Other thorny climate issues persist, such as the Greens‘ demand for a speed limit or an outright ban on cars with a combustion engine, which the FDP rejects. Differences also exist on Germany’s coal phase-out, which is currently set for 2038 but which the Greens want to move to 2030. The FDP wants incentives instead of regulations for energy providers to switch from coal to renewable energies before 2038.