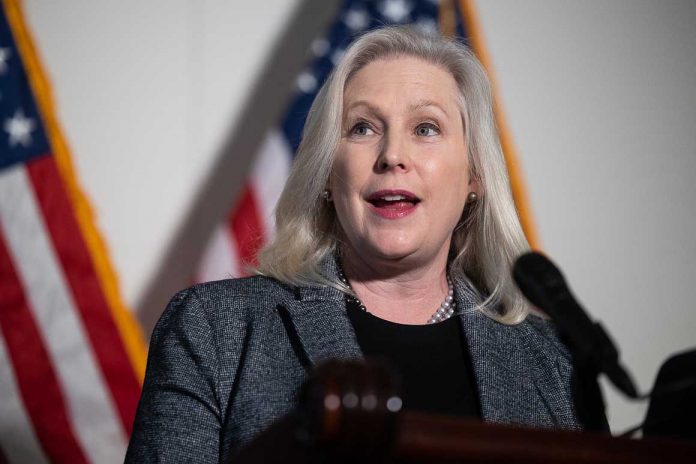 Congress is on the verge of demonstrating an unfashionable truth: It’s still capable of bipartisan achievements — they just tend to take years.

The Senate is expected Thursday to pass legislation reforming the way private companies handle sexual assault and harassment cases by ending the use of forced arbitration to resolve workplace disputes. The bill, first introduced in 2017, is more narrow than some advocates had hoped but nonetheless amounts to Congress’ most significant response to the #MeToo movement to date.

And everyone has a different theory for why it’s finally on course for President Joe Biden’s desk.

Democrats credited their leaders, in full control of Washington for the first time in a decade, for getting floor time for the legislation led by Sens. Kirsten Gillibrand (D-N.Y.) and Lindsey Graham (R-S.C.) and Rep. Cheri Bustos (D-Ill.). Republicans cited years of stories shining a light on how common workplace sexual assault and harassment can be.

Businesses and members of Congress initially “felt like it was a passing fad and that they maybe didn’t have to be as introspective about the way in which they were handling these types of things,” Carlson added. “The movement has continued. Also, we’ve just heard more and more stories.”

The legislation’s four-year-long path to likely enactment highlights the winding road many bills take before being signed into law, despite the sense of urgency that both parties often use to jolt bills toward passage. While the Senate last year pulled together a bipartisan infrastructure package in a matter of months and in 2020 crafted a coronavirus relief package in the span of days, the chamber’s norm is closer to the grinding path that the #MeToo legislation has traveled over the past several years.

The Gillibrand-Graham bill would give sexual harassment and assault victims the option to take their claims to court, as opposed to going through forced arbitration, a mediation between alleged victims and perpetrators that takes place outside of the traditional judicial system. The House overwhelmingly approved the bill earlier this week, and it’s expected to see a similar bipartisan margin in the Senate, with backers ranging from progressives like Sen. Mazie Hirono (D-Hawaii) to conservatives like Sen. Josh Hawley (R-Mo.).

“This is among the largest workplace reforms certainly in our lifetime,” Gillibrand said. “The biggest change is, we are in the majority, and this is something that had the votes to pass under Sen. McConnell. But we were never given the vote.“

Gillibrand and Graham first introduced the legislation in December 2017, at the crest of a wave of sexual misconduct allegations that ended the careers of lawmakers in both parties. In a sign of the Gillibrand-Graham bill’s prospects on the Senate floor, the Senate Judiciary Committee — known for its partisan brawls — approved it unanimously in November. The bill is slated to be approved by voice vote Thursday.

Iowa Sen. Chuck Grassley, the top Republican on the Judiciary Committee, said he came around to ending forced arbitration for sexual harassment and assault cases despite being a strong backer of the mediation process itself.

“There’s a lot of publicity about sexual harassment and about people not getting justice through the present process,” Grassley said, when asked why the bill was moving now. “I’m quite an arbitration supporter, but in this particular instance I think that it’s easy to cover up sexual harassment, sexual assault. … And women’s issues are a hot issue right now too, and ought to be.”

The Gillibrand-Graham bill has also attracted GOP support thanks to changes driven by concerns from Republicans such as Iowa Sen. Joni Ernst, who introduced her own alternative proposal. During the bill’s markup, the Judiciary Committee removed collective bargaining provisions, and the House-passed legislation clarified that the term “harassment” would be defined by states and localities.

Ernst, who has partnered with Gillibrand on bipartisan military sexual assault reform, also met with Graham and Senate Majority Leader Chuck Schumer on Tuesday to clarify that the legislation would only apply to sexual harassment and assault cases — not other employment issues, according to a Senate GOP aide.

“That’s the legislative process … People had legitimate concerns about the original product,” Graham said. “We listened to them, we changed, and I think we’re on the verge here of passing the thing. It’d be a big deal to me.”

Not every Republican, however, is convinced.

Sen. John Cornyn (R-Texas), a member of the Judiciary Committee, said this week that he is “skeptical” of the bill, suggesting that it would benefit trial lawyers. Proponents of mandatory arbitration say that it offers a less costly and time-consuming option. The Chamber of Commerce supports Ernst’s alternative bill, but hasn’t publicly taken a position on the Gillibrand-Graham legislation.

Advocates of eliminating forced arbitration argue that the current process favors employers by keeping sexual misconduct allegations and investigation findings confidential and requiring employees settle their cases out of court. Making those allegations public, advocates predict, will reduce harassment and assault in the future by deterring perpetrators.

And many see the Gillibrand-Graham bill as only a start.

“I have wanted to get rid of mandatory arbitration and all consumer contracts for well over a decade,” said Sen. Elizabeth Warren (D-Mass.). “We’re getting action right now because it’s focused on sexual assault, but make no mistake: Mandatory arbitration is a way for giant corporations to squeeze consumers and make sure that they don’t have access to the courts, to exercise their legal rights.”

“Sen. Schumer is looking around for some things to pass, and there are many things that we can pass that have bipartisan support,” Kennedy said.

Even so, senators in both parties largely agreed that there’s no single or overarching reason for the bill’s recent movement.

Judiciary Chair Dick Durbin (D-Ill.) said “it’s hard to explain why certain moments” lead to the passage of legislation, but he credited the breadth of the country’s struggle to identify and combat sexual harassment.

“There’s so many things that have been in the news on this issue,” Durbin said. “It just touched every corner of American life.“