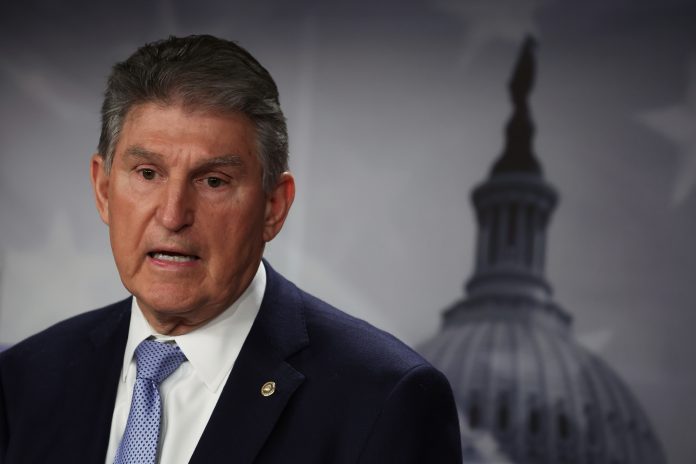 Minutes before he would have crashed and burned, Joe Manchin found an escape hatch.

After 20 months as the focal point of the 50-50 Senate, the West Virginia Democrat found himself with only one good option as Republicans were set to defeat his signature energy permitting legislation: yank it from government funding legislation. The move kept alive Manchin’s top priority of speeding approval for energy projects, yet he has no guarantee that it will find a more welcome reception later this year.

Manchin’s permitting bill began as a coda to his outsized leverage in a Congress that found him playing decisive roles in everything from a bipartisan infrastructure law to post-Jan. 6 presidential certification reform to two massive Democratic-only bills. The centrist hatched a two-part deal with Senate Majority Leader Chuck Schumer this summer: First Manchin would help pass a party-line climate, health care and tax bill, then Schumer would take up a plan to expedite big energy projects including West Virginia’s own Mountain Valley Pipeline.

But Manchin’s final major priority after a stretch in which everything broke his way needed the support of Republicans. And there were simply too many problems for him to solve in too short a time after releasing his legislation just last week. His home-state GOP colleague Sen. Shelley Moore Capito has her own permitting bill, and Republicans who want to defeat Manchin in 2024 largely have no desire to help him out of a jam.

“He thought he was going to pass a bill and get it signed into law. He miscalculated, is the nicest way I could put it,” said Sen. John Cornyn (R-Texas), a close ally of Senate Minority Leader Mitch McConnell, who whipped against Manchin’s effort behind the scenes and publicly pushed for its defeat on Tuesday.

Democrats saw Alanis-level irony in Republicans taking down a policy priority so many of them have talked for years about enacting.

“If Senator Manchin thought they were going to agree to something that he knew that they wanted, then I guess you could call this a miscalculation,” retorted Sen. Tina Smith (D-Minn.), who supports Manchin’s permitting bill. “Or you could say that they’re playing politics.”

Manchin had cast this week as pivotal to his effort, arguing it was essentially now or never. Over the past few days, he’s worked the phones behind the scenes to save his bill, dialing up Republican senators from energy states and talking to energy industry leaders for a final push.

He said in an interview that he talked to “all my friends, industry — anybody I possibly can.” As McConnell telegraphed he had the votes to stop Manchin, the centrist requested that Schumer pull the permitting language out of a short-term funding bill.

Soon after Manchin observed that “a failed vote on something as critical as comprehensive permitting reform only serves to embolden leaders like Putin who wish to see America fail,“ he got back to work on the floor. Approaching Sen. Bill Cassidy (R-La.) on the Senate floor, Manchin told Cassidy: “Let’s get together.”

He has at least two more leverage points to get his permitting plan passed this year, and they don’t carry the same urgency as this week’s pre-election deadline. The first is Congress‘ annual defense policy bill, which could come after the election, and the second is December’s lame-duck government spending bill.

Either could offer the vehicle for Manchin’s legislation to finally become law, though that almost surely would require him to cut a bipartisan deal with people like Capito and Cassidy. One promising sign: Capito indicated she’s up for dealing.

“This issue is so important that, I think, getting people to the table, we can forge a bipartisan compromise,” she said in an interview.

Thus far Republicans have preferred bypassing more environmental regulations than Democrats can stomach in an energy permitting overhaul. But Democrats don’t see the gap as unbridgeable.

“We should negotiate. I don’t know if the Capito bill is the right baseline to start with, because that was an aggressive wish list,” said Sen. Brian Schatz (D-Hawaii). “But Sen. Capito has a history of doing bipartisan deals.”

Many Democrats supported Manchin’s bill as an avenue toward meeting President Joe Biden’s climate goals, which call for slashing U.S. planet-warming gasses in half, relative to 2005 levels, by the end of the decade. But they caught flak from environmental groups and the caucus progressives, who said Manchin’s bill cleaved pollution protections for communities near energy projects.

A delayed vote can sometimes lead to Congress abandoning an effort altogether, but senators in both parties said that’s not the case with Manchin’s measure. Schumer publicly declared he was committed to ensuring “responsible permitting reform is passed before the end of the year.”

What became clear Tuesday after Manchin pulled his bill from a certain implosion: His leverage is less strong than it was this summer when he controlled the deciding vote on Democrats’ agenda, but party leaders see themselves as indebted to him and aren’t going to walk away now.

“We’re approaching this in good faith. Manchin made some major concessions, dramatic and positive for the nation, and for our election chances,” said Senate Majority Whip Dick Durbin (D-Ill.). “And we want him to feel he was dealt with fairly.”

Manchin’s also been central in the bipartisan deal-making of the 50-50 Senate, preferring to collaborate with Republicans rather than run them over. Giving space for Manchin and Capito to work their will after a frosty start on a top priority for their state could ultimately translate to more support, if and when any follow-up legislation gets to the floor.

Off the Hill, some in the energy industry view Manchin as open to adjusting his legislation for another chance later this year. Others perceive Manchin as boxed in on a sensitive issue for environmental groups as well as business interests.

“He’s running up against some of the limitations for kingmaking abilities,” said a former Obama White House official who works on clean energy issues, speaking candidly on condition of anonymity. “I’m not sure he’s fully grasped that yet.“

Any moves to placate Republicans would cost him support with Democrats, and vice versa. As Sen. Kevin Cramer (R-N.D.) put it: “It’s going to be tough. We’re so far apart on this one, it’s hard to know how we get there.”

He and other Republicans are also wary about loading up the defense policy bill with unrelated measures. That sets up another strange-bedfellows dynamic with environmental groups that are ready to play defense on any other must-pass bills which could serve as a permitting vehicle.

“It appears we’ve won this round,” said Matthew Davis, senior director of government affairs with the League of Conservation Voters. “It may just also be a short respite before we’re fighting the next fight.”

They’ll have plenty of competition from big business, however. The Chamber of Commerce made a rare double endorsement of Capito and Manchin’s separate proposals, an unsubtle prod for the two to get together and strike a deal.

“Everyone has a stake in it. Schumer has a stake in it, Capito has a stake in it. It’s just about fixing it to get to 60,” said Christopher Guith, senior vice president of the U.S. Chamber of Commerce’s Global Energy Institute. “We’re certainly going to expend all of our efforts trying to find that political compromise that threads the needle.”

Sinema switches to independent, shaking up the Senate